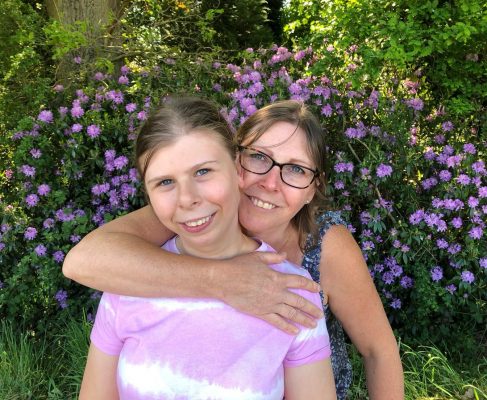 I work for the Williams Syndrome Foundation

I am Liz Martin, CEO of the WSF, pictured here with my daughter Evie who has WS. I just wanted to reassure you that a diagnosis of WS is not the end of the world, and let you know that if you need to talk to a fellow WS parent, Natalie and I understand both the challenges and the joys of raising a child with WS and we are here to support you.

Evie was diagnosed with WS three months before her third birthday. Her diagnosis was a shock, but also a relief – we finally knew why her development was delayed. We joined the WSF immediately as we wanted to find out as much as possible about WS, get a picture of what her future might look like and ensure that she got the support she needed to reach her potential.

As a baby, Evie was not interested in many toys, preferring face-to-face interaction with adults and was extremely friendly and affectionate. She was diagnosed with hypermobile joints just before her first birthday and was provided with supportive boots to stop the rotation in her ankles, she then learnt to crawl at 18 months and took her first steps at 22 months. Her language was delayed, but between turning 3 and starting school nursery six months later, she went from saying single words to sentences and I felt more confident that she would be able communicate enough to attend a mainstream school. Although we had had to wait for her to achieve these major milestones – our excitement and pride when she did was incredible.

She is now 16 and at a Special High School, having left mainstream education at 11 (where she had 1:1 support). She is still extremely loving and affectionate, but she has learnt now not to share this side of herself with complete strangers. She is very much a teenager – she’s untidy, has the odd strop, argues with her brothers, loves listening to music, playing on her iPad and has crushes on boys. She is taking AQA qualifications as GCSEs are not within her capability, although I know that some individuals with WS have GCSE qualifications and some also attended mainstream high schools. Evie will remain at her Special School for six form, but they will take her to college once a week to study animal care (she wants to work in a zoo) and she will also be a part of their coffee shop team – they shop, cook and then run a coffee shop at a nearby bowls club. Evie can swim a few lengths (with rests in between), trot on a horse, ride a trike, is a member of a signing choir, goes to table tennis club and loves ten pin bowling. She does worry about things, and this has increased with age, but generally she is happy and lights up our lives. I know that the future poses challenges both in terms of finding occupation for her when she can no longer access education and also in considering her living arrangements as we age, but we would not trade the joys of having Evie in our lives to avoid these challenges.

Every individual with WS is unique, but with support they can all flourish. The Foundation is here to support you and your family through this life journey.